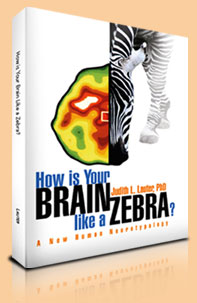 Intended for the general reader as well as specialists, How is Your Brain like a Zebra? presents the author’s fascinating new theory that there are three major brain types created by sex hormones before birth—Polytropic, Middle, and Focal. She makes a persuasive and often startling argument that these brain types influence many human traits and differences, such as personality, special skills, learning disabilities, and a whole host of medical conditions. The book describes in detail how this unique approach promises new (and practical) insights into such puzzling issues as hyperactivity, autism, nicotine addiction, cancer, Alzheimer’s disease, and dyslexia.

Dr. Lauter begins by revealing that your brain is like a zebra in two ways: (1) every brain is unique—like the “fingerprint” pattern of stripes on individual zebras; and at the same time, (2) there are metapatterns which can be used to group individuals—species and subspecies for zebras, other types of groups for humans. Then How is Your Brain like a Zebra? goes on to outline the scientific background of Dr. Lauter’s new neurotypology, describing how sex hormones can have dramatic effects on certain important features of the brain both before and after birth, and outlining predictions regarding the results—three major brain types.

The book explores the practical implications of brain types in the form of a series of question-and-answer (Q & A) notes about how to apply brain types to everyday life. The Q&A notes discuss things like risk factors and special skills, often using vivid anecdotes about real cases. This section of the book illustrates how brain types can be used to understand a wide range of individual differences, from the origins of domestic violence to why the first-born child in a family is often so different from the last-born. Read this fascinating book now to find out which kind of “zebra brain” you have and discover unique insights about you and everyone you know!

Recently in my Human Neuroscience Laboratory at Stephen F Austin State University, I tested a ten-year-old, a sweet boy who spoke politely and did what was asked of him, but who had trouble sitting still for very long and found it difficult to describe the contents of a simple paragraph. When I met with his mother several days later to show her what my tests revealed-- how patterns in his brain predicted his problems in school and staying still-- I showed her the technical data in the form of numbers and graphs. She seemed satisfied, but I could tell she was more than a little mystified. I’m sure my assessment would have meant much more if I could have handed her this book.

Over the years I’ve talked with many parents about their kids, as well as with adults who were tested. For everyone who has patiently wrestled with my graphs and listened to my explanations, this book is for you. Lynette, this is for you, Tom and Toni, this is for you. To all the moms, dads, teachers, and clinicians I haven’t yet met, but who want badly to understand what’s happening with their kids, their clients, and themselves, this is for you. The main message I hope you will take away is that brain patterns are firmly based in biology. It’s not “all in your mind” -- it’s in your brain.

These patterns are readily comprehensible-- and can provide practical guidelines for improving your quality of life. Moreover, these patterns, which I call “brain types,” are all about the individual, and in many ways resemble the patterns of color in an animal’s coat-- rings on a cat’s tail, dapples on a horse’s coat, stripes on a zebra. Surprisingly, you don’t need expensive testing to unlock the secrets of brain types. They can be recognized in numerous ways, including direct observation of personality, skills, and even height and coloration. Sometimes easy to see, sometimes harder, they are always there, waiting to be discovered with a little detective work. In that sense, this book is a kind of training manual to turn you into a “brain detective.” My aim is to give you enough basic information that you can figure out the brain type of nearly anyone you know –- and what that might mean, both for them and for you.

Color patterns in animal coats have always fascinated me -- two cream brushstrokes along the chocolate back of a chipmunk; turtle-shaped patterns along the neck of a giraffe; the snowy throat of a Canada goose like a kerchief around her neck; or the stripes-on-stripes of a grazing zebra family.

Sometimes, the patterns in an animal’s coat are difficult to see. Our Siamese cat had what seemed to be a solid brown tail, but when she was sleeping in the sun, you could see circles around it, like the wild ring-tailed cats from South America. When I finally had a horse of my own, I was delighted one summer to find dapples hidden in the depths of her glossy black coat. If you looked closely at her side with the sun at the right angle, you could see dapples scattered across her hips, ghosts of a design from far back in her genetic past, long before horses took up life on short-grass prairies, when dapples were needed for camouflage, to mimic the dappled sun-and-shade of a leafy forest.

I began my education, not in science, but as a literature major, reading Dickens and Dickinson, writing poetry, delighted most of all by poets who blended art and science, like the “metaphysicals” of 17th century England. But a parallel fascination with science proved to be too strong -- in a second go-round as a graduate student, I put aside books of poetry and started reading about the brain. One of the many wonders I soon discovered was a collection of photos showing visual patterns created by populations of brain cells -- and I found those same animal coat patterns staring back at me. One photo looked exactly like the irregular squares on a giraffe’s shoulder, another resembled the spots of a leopard (or the dapples on my black mare), a third was indistinguishable from the stripes of a zebra.

At first, this seemed like a coincidence. I could see no real reason that populations of neurons should make such patterns. I later learned that patterns in the brain and animal coats are created by what are called “activator-inhibitor systems,” obeying a rule that accounts for many types of patterns in biology and physics. Thus the similarity of stripes and spots in the brain and in fur are just another an instance of the many types of repeated forms that scientists have found in nature-- galaxies spiralling like water going down a drain, “wiring diagrams” that work well in one direction for drainage (whether blood vessels or continent-spanning river systems), and in the other for increasing points of contact with a surrounding medium (whether the branches of 100-foot trees or the tree-like “dendrite” branches of microscopic brain cells). But brain-cell populations like zebra stripes—that seemed wonderful!

However, it was not until years later that I returned to that image, like a memory kept, a favorite quilt folded and put away in a cedar chest, waiting for the right moment to be taken out and used. And in fact, the zebra-stripe pattern has turned out to be an ideal image to describe what I have found over and over again in my research on the brain and human behavior, a combination of features which jumped out at me from the results, time after time, experiment after experiment: individual differences, and groups of individuals.

To answer the question posed in the title of this book, then, your brain is like a zebra in two ways: 1) every brain is unique -- like the “fingerprint” pattern on individual zebras; and at the same time, 2) there are meta-patterns which can be used to group individuals -- species and sub-species for zebras, other types of groups for humans.

The hunt for ways to explain individual differences and groups of individuals is called “typology.” As we’ll see, the history of typology goes back thousands of years -- to astrology systems developed around the world, in the writings of the philosophers of classical Greece and Rome, and in more recent classifications based on modern medicine and general mammalian biology. This book, however, is about a new typology, updated to include the newest findings about the forces that shape all animals, including humans. Because it’s a typology based on the brain, it’s called a “neurotypology.”

There are many details to this story, and I’ve written numerous research papers about how individual differences in the brain show up again and again, no matter what test method scientists employ -- whether Positron Emission Tomography, Evoked Potentials, or Magnetic Resonance Imaging. In writing this book, therefore, I’ve drawn on my own work as well as that of numerous other observers -- parents and teachers living on a day-to-day basis with their kids, clinicians experiencing the diversity of people who come through their clinic doors, scientists using field studies and laboratory research to study humans and other animals. My conclusions are also based on data drawn from many scientific disciplines, from neuroscience to embryology to animal behavior, but I won’t drag you through a dull “review of the literature,” dropping names and footnotes as I go. I will provide a brief history of “where I’m coming from” and which scientific giants I’ve leaned on for their broad shoulders. On the whole, however, this book is about my own ideas. They are derived from my life experiences, my reading in brain and behavior, and more than three decades of work as a research neuroscientist.

Part One of the book will provide the scientific background of this new neurotypology. I will describe certain important features of the brain, how sex hormones can have dramatic effects on some of those features both before and after birth, and outline some predictions regarding the results -- three major brain types.

Part Two will illustrate the practical implications, in the form of a series of a Question and Answer (Q&A) notes about how to apply brain types to everyday life. The notes will discuss things like risk factors and special skills, and show how brain types can be used to understand a wide range of individual differences, from the origins of domestic violence to why the first-born child in a family is often so different from the ‘baby.’

Finally, my aim for How Is Your Brain Like a Zebra has been to make it as accessible as possible to a very important person, someone who is often forgotten or ignored in our age of over-specialization and experts – the General Reader. I think of this as someone with a high level of innate curiosity about what makes us tick as human beings, but who does not necessarily have an extensive scientific background. My obligation to this reader is to keep the technical material to a minimum, but without oversimplifying things. This is brain science, after all, and in Chapters 2 and 3, we will have to take a few slow, careful steps down a winding path of technical details – but that’s only so that later on, when we get out onto the open plain of the Q&A section, our Zebra can gallop at full speed. Even a metaphorical zebra has to walk before she can run.

PART ONE - THE SCIENCE OF BRAIN TYPES

Chapter 1. Zebras, Brains and Fingerprints: The History of Human Types

Chapter 2. How Brains Work: The Importance of Being Well Connected

Chapter 3. How to Grow a Brain: From Hormone-Free to High-T

Chapter 4. Meet the Brain Types: Up Close and Personal

Appendix: Questionnaire: What is Your Brain Type?

This book is enrolled in Xlibris’ Bookstore Returnability Program, which gives booksellers the convenient option of returning excess stocks through Ingram Distribution.