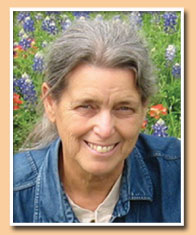 Born and raised for the first nine years of her life in Austin TX, Judith Lauter received a BA cum laude in English Language and Literature from the University of Michigan Honors College in Ann Arbor, where she also won two Hopwood Creative Writing Awards for manuscripts of poetry. Her coursework in English and literature was complemented by study in a range of natural sciences - botany, geology, biological anthropology. She subsequently earned three master's degrees from other universities (creative writing, University of Arizona; information science, University of Denver; and linguistics, Washington University in St. Louis), and completed a PhD in Communication Sciences from Washington University in St. Louis in 1979.

Her postdoctoral work at CID included teaching undergraduates, graduates, and medical residents. Judy also conducted multiple research projects exploring the physiological correlates of individual differences in brain asymmetries in collaboration with several groups at the Washington University School of Medicine. This work included studies of brainstem and cortical evoked potentials with faculty in Otolaryngology, and research on regional cerebral blood flow conducted in the Positron Emission Tomography (PET) laboratory directed by Marcus Raichle at the Mallinckrodt Institute of Radiology, where Judy also served as a consultant on PET experimental design from 1981-1985.

In 1985 she left St. Louis to take a research appointment at the Department of Speech and Hearing Sciences at the University of Arizona, where she supported her Coordinated Noninvasive Studies (CNS) Project via a 6-year series of grants from the Air Force Office of Scientific Research. She also worked with high-school, undergraduate, and graduate students, and directed several doctoral dissertations. Her research gave her additional hands-on experience with a variety of noninvasive methods for studying the brain, ranging from evoked potentials and PET to quantitative electroencephalography (qEEG), magnetic resonance imaging (MRI), and magnetoencephalography (MEG).

These studies addressed both normal brain function and the neurological basis of conditions such as hyperactivity, nicotine addiction, multiple sclerosis, and Alzheimer's Disease. This work was in collaboration with scientists at the University of Arizona Medical School, the University of Wisconsin, the U.S. Veterans Administration, the University of Tennessee Medical Center, and the Los Alamos National Laboratory. The results were presented and published nationally and internationally, and reviewed in several tutorial chapters on brain imaging and in a series of imaging workshops Judy presented around the U.S.

In 1991, Judy joined the faculty of the University of Oklahoma Health Sciences Center (OUHSC) where she founded and served as Director of the Center for Communication Neuroscience (CCNS). Her work in this period involved collaborations with departments on both the medical and main OU campus. She taught undergraduate and graduate courses, directed doctoral dissertations, and gave interdisciplinary lectures and Grand Round presentations to numerous departments, including Psychology, Pediatrics, Neurology, and Anatomy. She also wrote major grants with a number of groups including Pharmacology/Toxicology, Pediatrics, and Public Health; conducted research on reading and learning skills with individuals from other Oklahoma universities and the public schools; and hosted on-campus laboratory internships for high-school students, and research projects for middle-school students working on science fair projects. Judy also served as Public Liaison for the statewide Oklahoma Center for Neuroscience, for which she created NeuroNights, a monthly series of community-outreach programs offering the public the opportunity to interact with neuroscientists and clinicians on a wide variety of topics related to the brain.

In 2001 she joined the Department of Human Services at Stephen F. Austin State University in Nacogdoches Texas, where she founded and served as Director for the Human Neuroscience Laboratory (HNL). The HNL research mission included: 1) developing new ways to use inexpensive, noninvasive technologies to study the brain; 2) documenting individual differences in terms of "neurological fingerprints" which link the central nervous system, peripheral physiology, and behavior; 3) studies on a wide variety of human characteristics, ranging from gender behavior and personality, to the propensity for different types of disorders such as autism, hyperactivity, dyslexia and Alzheimer's Disease; 4) diagnostic testing, recommendations, and referrals; 5) collaborative studies with individuals from many levels of preparation who have the opportunity to share in cutting-edge research; and 6) community outreach, communicating to students, teachers, and the general public the excitement of research on the human brain.

Following the publication of How is Your Brain Like a Zebra? Judy was interviewed about the book for an online podcast resource about pioneering neurological research; the podcast can be heard at www.neuroscene.com [search Lauter]. The "zebra-brain" model is also featured in a 3-hr educational video presentation by Judy, commissioned by The American Speech-Language-Hearing Association, and entitled Neuroimaging: How understanding individual differences can improve your clinical practice; copies of the video and accompanying manual are currently available by special purchase from the author.